Choreosonic Music Of The New Dance Theatre Of Alwin Nikolais 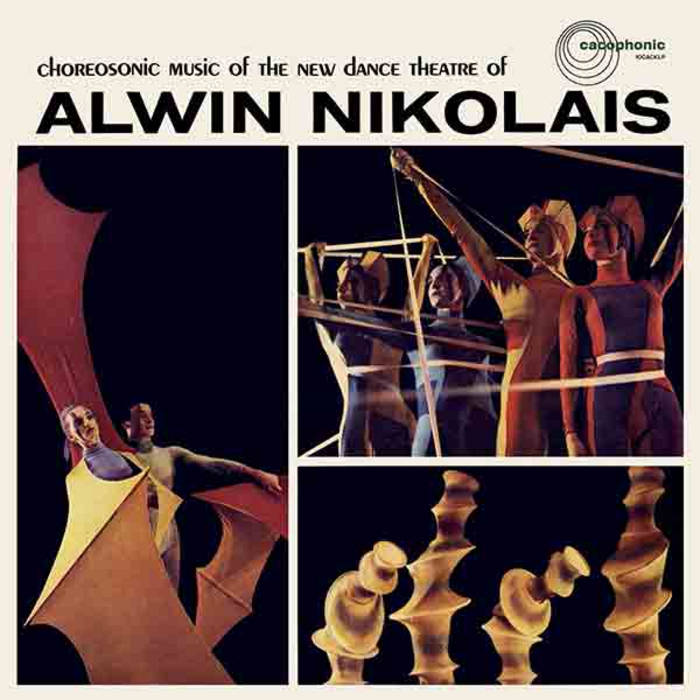 Choreosonics was the name of the music for the choreography of Alwin Nikolais - a unique theatre exposition that was described in the late 50s as “the new theatre of shape, motion, light and sound.” In 1953 Nikolais attracted people interested in new art to his dance concerts at the Henry Street Playhouse in New York City. In these concerts dancers became colourful motivating sources for sculptural shapes; moving in changing atmospheres of light and sound their relationship carefully integrated into a new kind of audiovisual abstract theatre art. The sounds created for this were not conceived from traditional music points of view but were designed to share and support the total visual dynamics.

Such a creation was possible because of Nikolais’ background as a musician as well as choreographer. At sixteen he was playing piano and organ for the then disappearing silent films, improvising and coordinating music four to six hours daily to the dramatic content of the movie. With this profession obsolete, he turned his skill into accompaniment for dance. Through this his interests led to his study of percussion accompaniment and exploration of new sounds. These ideas were stimulated by the kind of dance accompaniment introduced by the famous German dancer, Mary Wigman. This, in turn, induced Nikolais to study dance and ultimately to switch his career from musician to dancer and choreographer. Nikolais was soon heralded as one of the leading figures in modern concert dance, he is credited with bringing about revolutionary ideas opening up new vistas for dance and
theatre. Nikolais' activities were centered at the Henry Street Playhouse in New York. His work was created there with his assistant Murray Louis; sound engineer David S. Berlin; artist George Constant and members of his Playhouse Dance Company. All of whom had a hand in the final productions. Performances with names like Prism, Cantos and Totem were met with positive critical view for their multidisciplinary achievements. While his collaboration with Harry Partch on The Bewitched established his name alongside another true maverick of American sound design and forward-thinking composition. Some of Nikolais' dancers were also trained as percussionists who improvised on a curious assortment of sound producing instruments and objects while other dancers worked through the choreography. David Berlin, who assembled and constructed the sound recording equipment, would operate from the sound booth from a window overlooking the stage. Nikolais would direct the experiments and improvising. Within any performance there would be numerous tests of the original sound and their possible electronic conditioning, including many playbacks of short phrases tested to the dancers’ motion. When the sound phrase proved satisfactory the next cut was started. Sounds were cut down, enlarged, replaced and then the whole piece would be linked together and given final editing much the same as a filming process. Nikolais generally tried to avoid any identification of the sound sources, thus inviting the ear to perceive the sound itself divorced from its initial derivation. This, however, was by no means a final criterion, the ultimate one being the value of the sound to the theatre idea at hand whatever its source or manner of conditioning was. The objects used to produce these sounds were without limit except for practical material size. Within the collection many percussion instruments were used: drums of all kinds, rattles, bells, gongs, cymbals, wooden blocks, etc. Also whistles, tubes, pipes, pieces of wood, aluminum, steel and tin containers were utilised alongside glasses, elastic bands, coils of wire, etc. The back of an upright piano in addition to a grand piano were also often at hand. The human voice would be used freely, hand clapping, foot stomping and any sound producing device whatsoever that might served a purpose.

If you like Choreosonic Music Of The New Dance Theatre Of Alwin Nikolais, you may also like: