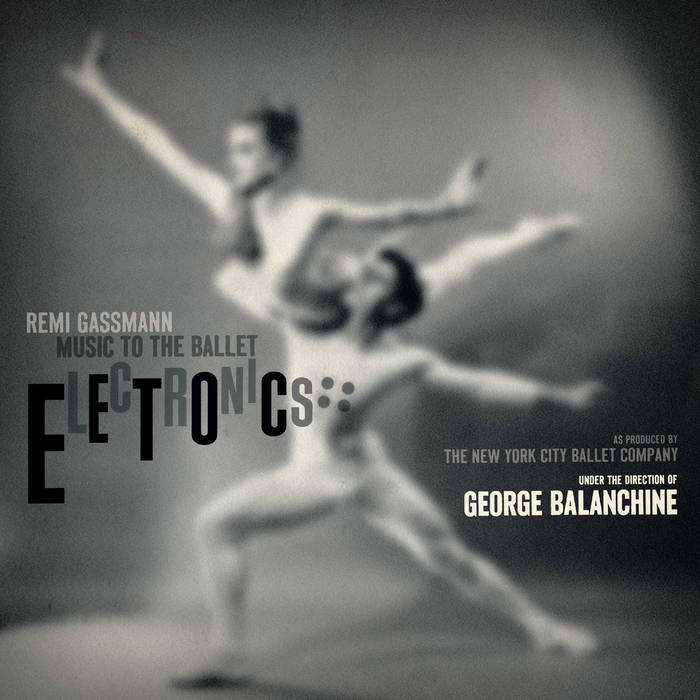 Originally staged March 22, 1961, as part of a double bill choreographed by George Balanchine, the experimental New York City Ballet production Electronics included the renowned dancers Violette Verdy and Jacques d’Amboise (pictured on the front of this album) and a revolutionary score by multi-disciplined composer Remy Gassmann using a truly unique instrument. Working alongside German born keyboard composer and close acquaintance Oskar Sala (with whom he had studied in Berlin under Paul Hindemith), Gassmann was given access and assistance to the latest developments of the Trautonium, an early electronic keyboard that was first exhibited in 1930 by inventor Adolf Trautwein and three pianists (including Sala).

Being one of the original exponents of the machine, Sala (with Trautwein’s blessing) took the basic model of a neon tube oscillator and wire frequency controller (which provided an untempered continuous tonal range) and spent over twenty years developing what would become the Konzerttrautonium (as used by Roichard Strauss to emulate synthetic gongs), followed by the micro- tonal Mixturtrautonium and eventually the static Studiotrautonium which formed the centrepiece of his own studio in Berlin-Charlottenburg where Electronics was composed and realised. For the 1961 ballet, dressed in metal- lic bodysuits with geometric diodic motifs, Verdy and d’Amboise (alongside a small troupe of other dancers) performed the concise eleven-part ballet to polarised but predominantly positive audiences, generating a new outlook on experimental dance and supporting the similar sensibilities of other choreog- raphers such as Alwin Nikolais, Yvonne Georgi (with Henk Badings) and Maurice Béjart (with Pierre Henry). As one of the first American performances drawing primarily on European developments, the modest critical success of the project would open new avenues for the electronic musical duo who were commissioned later in the year by Alfred J. Hitchcock Productions to provide enhanced and versatile sound effects emulating cacophonic bird sounds alongside Bernard Hermann for the 1963 blockbuster The Birds.