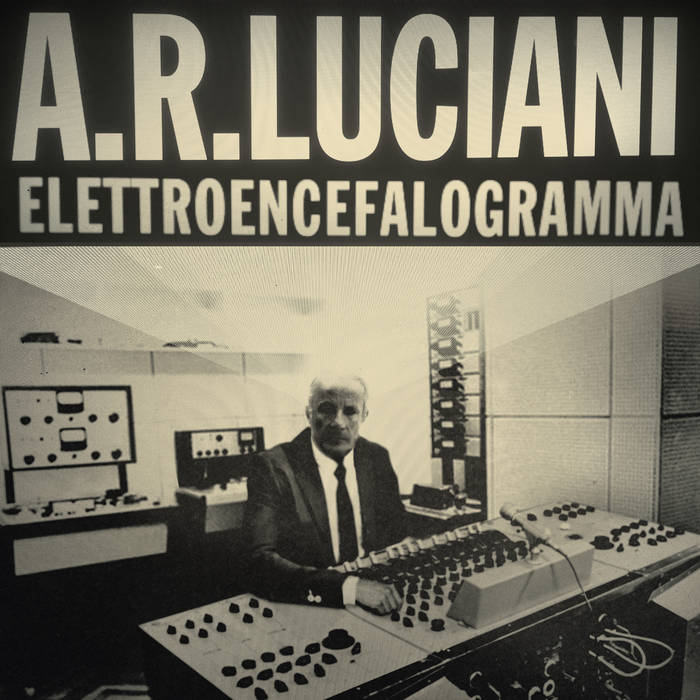 In the widening realms of uncovered European outsider art and maligned musical enigmas, the composer most commonly known as A. R. Luciani, along with his indeterminable and mostly uncommercial discography, continues to exist on the extreme outer limits. Despite his unwaning commitment to the Italian production music for the TV and film industry his work remains mostly undocumented in recent excitable books and documentaries.  Meanwhile his advancements in contemporary music, tape music, neo-classical, jazz, electroacoustic and counterpoint composition remains confided to the educational sector while his vast historical concert work remained exclusive to this discipline. If it wasn't for continued interest of owners of library music labels in the early 1970s it is doubtful that we would ever even hear the truly unique music of this Sicilian born (Florence raised) polymath who would eventually share anti-release schedules with the likes of Alessandro Alessandroni and Daniela Casa. For this reason, unlike many indispensable library legends of the era, it's arguable that Luciani should be considered a library musician at all, rather an independent, highly educated, experimental musician who happened to make library records. Library music clearly needed Luciani, rather that Ricardo relying on RIA's gravy train like many disposable artists of the gilded golden era, which is why this first-ever collection of his music, represents just the tip of an iceberg in a very deep ocean.

Despite the sea of unreleased magnetic tape and seemingly solitary studio excursions A. R. Luciani didn't swim alone. Beneath the iceberg tip was an academic "family" of music theorists and researchers such as American counterpoint student-cum-professor/composer David Hoyt Kimball and Antonino's sister Maria Teresa, both of whom were published authors who initiated endless research projects. It was following an unlikely quirk in the Italian music industry that Luciani's experiments would make their way to professional studios at the request of labels like Cooper, Leonardi, Deneb and Fama (all of whom came to rely on Luciani as one of the first solo musicians who could create ready-made low cost high-concept instrumental music with incredibly short turnarounds). Maintaining close links with members of Teresa Rampazzi's electroacoustic group NPS, namely Serenella “Serena” Marega, Luciani also became an early adopter of advanced electronic music which he successfully entwined into his patchwork compositions in advance of the popularisation of synthesiser technology. With the advent of two of his compositions gaining major commercial success as long running TV themes, A. R. Luciani would dedicate a tight decade to composing a wide and varied discography of challenging production music at a breakneck workaholic rate, occasionally working in collaboration with Maria and Kimball (whose registered publishing society names he would eventually adopt for his own overflowing workload). It is via Luciani's own co-funded imprints Le Monde and Publispei where much of the most focussed "Luciani Family" work is best exemplified (authentically repackaged by the Cinedelic label in recent years).

This compilation aims to provide a concise, but varied, overview of Luciani's most groundbreaking musical experiments that were made available to us via a host of production music labels in the 1970s. Needless to say these original records are rare and have obviously never been intended for commercial release until Finders Keepers/Dead Cert's recent collaborative work with "Tony" Luciani himself. With individual tracks begging instant comparison to our previous solo release Sounds Of The City by Maria Teresa Luciani (complete with all matter of mind-melting tape loops and resampled pre-synth applications) and other tracks embodying stark small group orchestral tension amidst primitive electric drum box percussion, this album serves a multifarious toolkit portfolio of all of A. R. Luciani's most introspective, intimate, individualistic and uninhabited solo studio experiments. Without petering to the de rigueur pop or jazz funk stylings which came to typify the 70's library sound, this record provides a clear illustration of how Antonino Ricardo pushed his sonic sand-pare against the grain. Entitled ELETTROENCEFALOGRAMMA (after an early recording fro the Cooper label) this vinyl-only collection also embodies a wide array of pocket-symphonic beauty via solo multi-tracking and resampling, with a strict commitment to organic instruments and anti-synth found sound field recordings. Focussing of tracks recorded in a solo capacity under his real name this record is compiled in collaboration with the artist himself (steering from the many tracks recorded under nom-de-plumes like Peymont and Turicoli as well as his collaborative efforts) with tracks presented in their translated English titles in accordance with Tony Luciani's wishes. As our title suggests, Dead Cert Home Entertainment is proud to be the first label to take a closer look in to this seldom-scanned musical mastermind.