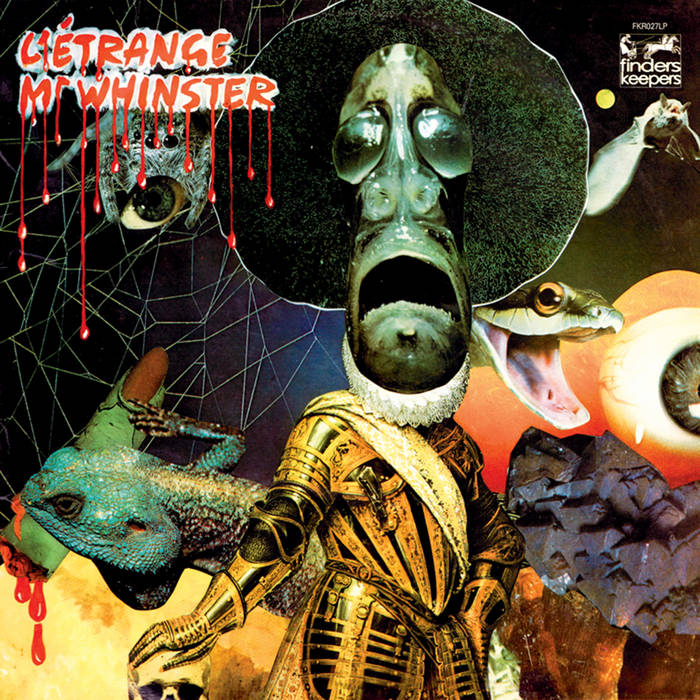 A schizoid sonic sketchbook from the Maledictus Sound-maker Dr. J. P. Massiera. A disturbing mix of dismembered tape samples, paranoid-poety and cosmic chaos resurrected from the crypt of Studio Antibes 1976

Dawn Of The Dead, or The French Connection 2, or For A Few Dollars More, or Evil Dead 2.

For an article relating to the bizarre Gallic concept album you are about to subject your ears to, any of the aforementioned 70s cinematic references could conveniently provide a snappy and relevant headline. More significantly, however, these four names, amongst a slew of surprising others, represent the micro-phenomena of freakish ‘sequels’ that up the ante and out-weird their predecessors pushing the envelope beyond what we thought we were prepared for… Not unlike The Horrific Child LP by Jean Pierre Massiera.

Like a self-hypnotism disc or an astrological record ‘… Mr. Whinster’ was marketed in the format of a psychological experience rather than a pop record. A bloodstained patchwork of surrealism and brooding psychedelic rock the LP stitched together Massiera’s own shock-tactical spoken word (in the style of his earlier exploitation record ‘Erik’ which described the ‘Streets Of Desolation’ after the Nazi occupation) and a cacophony of live instrumentation and de-tuned and collaged samples from the vaults of the Antibes Studio. Most of the contributors loosely described as the ‘personnel’ were featured in snippet and sample form apart from some short custom written passages that were performed by musicians from the Nice Music Conservatory directed by Antibes regular Gérard Pontieux who would later appear on the credits as an arranger for Human Egg and Turn Radio On (Massiera’s rare proto-disco collaboration with his half brother Bernard Torelli). Extra electric basslines were dubbed onto the record courtesy of ex-Pyranas / Hermaphrodites bassist Tony Bonfils (who would later appear in Synthesis and Human Egg). Beneath the deep theatrical growls of JPM himself, backing vocals came from the two singing duos Paul & Virginia and Micky & Joyce including samples lifted straight from precious sessions such as Visitors or Les Chats Renaissance. Massiera also credits vocal appearances to two bizarre figures from the French glitterati in the form of stage singer Roberto Galbés and the larger than life celebrity impresario Bob Damiano (who would later write lyrics for Massiera’s extra terrestrial Venus Gang project).