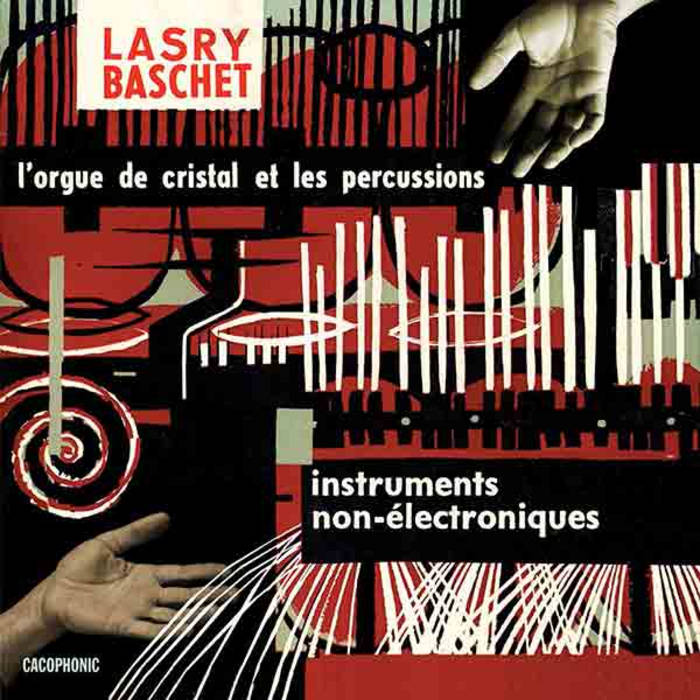 A collection of the earliest recordings of the French sound sculpture musicians and Cristalists known as Structures Sonores Lasry-Baschet. Featuring the first fruits of one of the greatest unisons in experimental French music combining the beguiling haunting sounds of Jacques and Yvonne Lasry and the development of the musical inventions of Bemard and Francois Baschet. Exploring a similar route to that of early Michel Magne recordings (and often likened to “a French Harry Partch”) the emotive music made with these organic, municipal, revolutionary instruments between 1957 and 1962 rode a narrow path between post-Second World War experimental music and anti-electronica before providing the world with the sound of the Granada Television Picture Box theme and one of Magma’s deepest foundations.

The instruments known as Structures Sonores were designed and made in the late 1940s by Paris born engineer and sculptor siblings Bemard and Francois Baschet with the original aim to create portable, collapsible and municipal instruments based on inflatable components.

Eventually incorporating metal bars, steel rods, air-filled plastic spheres (balloons), crystal stems and steel bars the instruments were totally independent of electrical or electronic components or equipment sidestepping the celebrated trends in tape manipulation and musique concrete, standing at the journalistic forefront of French experimental music in the 1950s. Played using horsehair bows and wet glass rods which resonated the tubes and metal surfaces the amplification was produced by the movement of vibrating rods embedded in ﬁxed plates and the timbre could be modified by altering the sizes of the resonators. By the early fifties the brothers had invented a series of large visually striking sculpture-like instruments that could be used by participants of any age regardless of any formal musical training mainly combining crystal, water and steel to create a specific delicate and very unique haunting sound.

A chance meeting with two enthusiastic piano based musicians called Jacques and Yvonne Lasry in 1954 lead to the formation of the Structures Sonores Lasry-Baschet (Lasry-Baschet Sound Structures) ensemble who spent the next decade touring the world while performing and composing for film, exhibitions and ballet performances. In 1960, Jean Cocteau contacted the association to provide music for his film, Le Testament d’Orphée (independently depicting a subject shared by concrètist Pierre Henry and Maurice Bejart) that was followed by a request from the French government in 1962 to represent France at the Seattle World’s Fair. The SSLB remained in the United States for a number of months playing concerts at universities travelling from California to New York where they performed at the prestigious Columbia University to a vibrant audience (including an excited Edgard Varese).

Receiving great global critical acclaim via articles in Life, Time, The New York Times and the Herald Tribune the Lasry-Baschet Sound Structures finally returned to Paris as acclaimed International musicians with a wide discography (having also sold a sculpture to the MOMA gallery which still remains in the its collection).

This compilation highlights the very earliest vinyl appearances of the collective that would become known as the Lasry-Baschet Sound Structures, including tracks from the first 1957 single for the Ducretet Thomson label, played by Jaques Lasry in his first solo “experimental” capacity, entitled L’orgue De Cristal Et Les Percussions (complete with it’s pop-political, almost anti-musique concrète “Instruments Non-Électroniques” disclaimer). The following selections mark the inauguration of an active relationship with the BAM label (an imprint also ironically committed to the aforementioned musique concrète movement), which marks the first of many compositions centred around both Jacques and Yvonne’s joint musical direction.

Included in the SSLB BAM discography are two notable ballet pieces from 1959 Jeux D’Ombres and Ballet Du Soho (both of which can be heard on the Cacophonic dedicated ballet release Danse Sacrale) which highlight the group’s adept conceptual compositional skills for multiple creative applications. The rare soundtrack to the J. Willemetz film L’Atomium (made especially for the 1958 Brussels World’s Fair) is also included here as testimony to the collective’s thematic versatility which already flourished in these formative experimental stages. Many of these inclusions also feature performances from the group’s regular collaborators such as clarinet player Roger Simon (De Wolfe/Chappell), vocalist Lucie Rapp and composer/percussionists Daniel Ouzounoff and Jacques Chollet alongside a rare piece featuring a young Teddy Lasry. The rare tracks from the Mister Blues EP for Unidisc stand as the first recordings of Teddy, who at just fifteen-years-old took over as the group’s lead clarinet player galvanising their celebrated family run image and in turn launched the career of a French progressive rock legend (providing bands like Magma with their signature cosmic military brass arrangements).

Within these formative years we hear the Lasry family at there most wide-eyed and vivacious. By pushing the Baschet instruments to their limits and presenting an unabashed free rhythmical approach the group embraced the fresh naked sounds in their rawest form before settling into a long-running career of concentrated melodic composition having truly mastered their unique tools alongside a new generation of Cristalists. The future years of Structures Sonores Lasry-Baschet would bequeath seminal tracks such as the sublime Manege, which (embodying many of the groups sonic watermarks found on this compendium) became the long-running title music for the British Granada Television series Picture Box (a programme that recontextualised European folklore films for children between 1966 and 1990) providing the group with their most far-reaching musical synchronisation commission and establishing Jacques as a successful (albeit uncredited) production music entity. On later period SSLB recordings in the 1970s Jacques would regroup with the then well-established Teddy Lasry to pursue similar work for moving image, composing themes for French library music labels (an increasingly collectable genre that bequeaths some hidden jewels of the SSLB family’s unofficial discography). Vive les Cristalists!