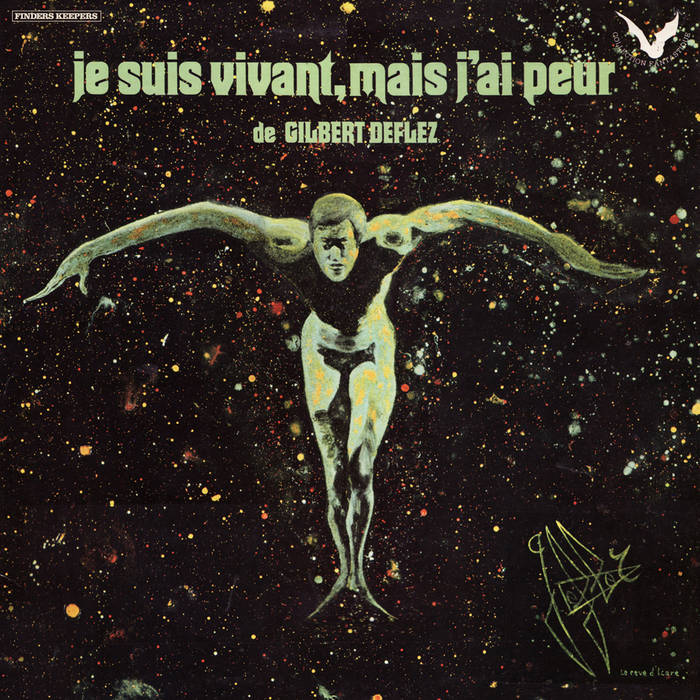 The name Gilbert Deflez is “ungoogleable”. Even with the help of Google’s own translation facility and armed with as many French rock encyclopedias as you can carry you’ll be hard pushed to find any cross references to Gilbert Deflez and French psychedelic pop music. After a few blind alley detours via online judo forums and French bookshops you are left surrounded by a cast of an ex-radio presenters, a Karate teacher, a science fiction author, a painter and a literary ecologist… Not a guitarist or funky drummer in sight. Of course most online record collectors would at this stage abort mission without knowing that if you combine all the above personalities you have in fact found the right guy.

For the lucky contestant fortunate enough to be stood in a record shop holding an original copy of ‘Je suis vivant, mais j’ai peur’ you might eventually find some answers in the small print. Hidden below an assemblage of school yearbook style portrait shots of ex-radio DJs and unknown actors and storytellers (that would suggest to many that you have found a spoken word LP) you’ll eventually find shots of four guys in headphones that look like musicians. If you share your record reading skills with a deep knowledge of Parisian prog pop and French rock then the 6pt text names J. Chalard, J. Mercier, P. Lhomet and M. Engel might ring some bells. With absolutely no indication on the records glossy gatefold exterior you are actually holding a rare chunk of French pop history – you’ve just found a secret psychedelic science fictional cosmic concept LP by one of the leading bands of the No-No generation. You might as well tell the man behind the counter to take all of the aforementioned buzz words write them on a sticker and plonk it on the front of this album, because this time they are all relevant and genuine. Then tell him to take another pen and write “mega rare ugoogleable missing LP by DYNASTIE CRISIS”. Otherwise keep schtumm because you’ve just struck vinyl gold.

So who is Gilbert Deflez? Most music fans will draw a blank. In 1974, however, thousands of Paris based fans of French comic books and Fantastique literature eagerly tuned into his weekly radio show on Europe No.1 to hear Deflez read science fiction stories to those within the airwaves catchments. Deflez wasn’t a disc jockey like all his other friends at the station, he was a story teller and voice actor who, on the strength of his show would publish a book under the same name ‘Je suis vivant, mais j’ai peur’ (I Am Alive, I Am Afraid) as an extension of his freakish fables feature while balancing his spare time as a book critic and karate

The story of Jacky Chalard and Dynastie Crisis, however, could be saved for another essay. The combination of ex-members of French based rock and roll bands The Mayfair Group (Chalard) and Jelly Roll (Jacques Mercier) founded the writing team behind one of France’s top progressive pop bands of the early 1970s alongside The Martin Circus, Triangle and The Variations. After an unshakable discography of killer singles including tracks like ‘Le corbeau et le renard’ and ‘Faust 72′ the group won the enviable job as both backing band and support group for Michel Polnareff which would later take the four piece on a tour of Japan. Dynastie Crisis released approximately two and a half LPs (the middle one was a re-dux of there underexposed debut) for the labels of Francis Dreyfuss and the French leg of Harvest Records.

Like most forward thinking LPs of the era ‘Je suis vivant, mais j’ai peur’ was too progressive for its 1974 release, and for an LP designed to sound like it was made 25 years in the future it was quite clearly ahead of its time by design. Perhaps a reissue in 1999 might have bought the LP up to date but given an extra decade to hibernate, a lot like the story’s leading protagonist, maybe the characters of ‘Je suis vivant, mais j’ai peur’ can finally be unleashed on planet Earth to inspect how our musical tastes have developed. I wonder how he will react to the apocalypse?