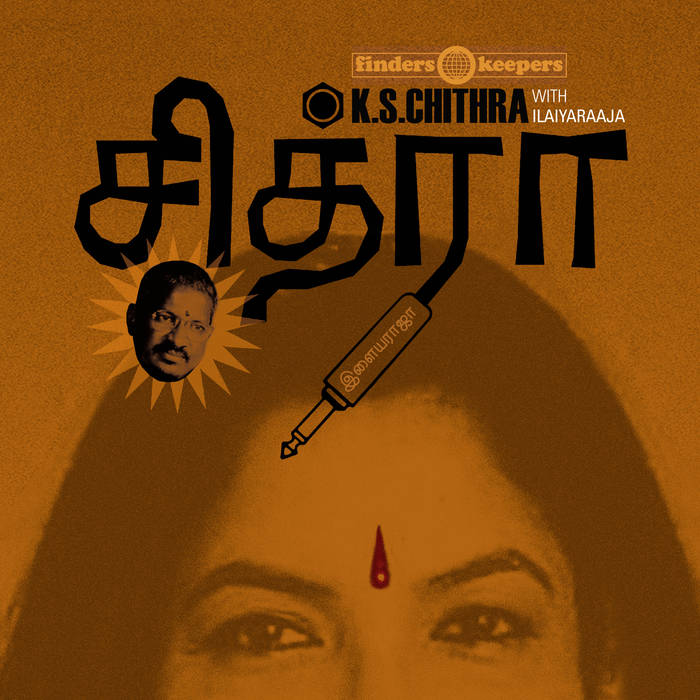 Destructa Here are some playful, romantic or funky collaborations from KS Chithra's lovely voice and Ilaiyaraaja's musical direction. And of course the video clips are half the fun, if you can find them on Youtube. The most fun track is the "drunk" song, Sikkunnu (video titled Chikkunnu Irukku), a duet with the famous SP Balu. It's wonderful to open up this vast world of Indian cinema music to whole new audiences. Favorite track: Sikkunnu.

Known by adoring fans and devotees, throughout South India, as Chinna Kuyil (Little Nightingale) on account of her expansive vocal range and crystaline sweet voice, the uplifting and surprising sound of K.S. Chithra is, for many, best exemplified by the early plugged-in-pop she made in the 1980s with the man/machine who first introduced her to the Tamil film industry, Maestro Ilaiyaraaja.

There are few records you will hear this year that combine the sounds of a child’s choir, a DX7 bass line, three types of drum machine, a mariachi trumpet cry, a re-sampled forty-piece orchestra and an electronic bass line that takes the moog taurus by the horns and rides into the Indian summer. There is probably less chance of hearing a vocal performance so confusingly dazzling that it instantly detracts from the previously aforementioned wish list combination of bizarre instruments but for those intrepid enough to dig a little deeper and take a detour due East, pick-axing right where Lollywood meets Bollywood – then prepare to be rewarded with a double, triple and quadruple whammy!

For odd pop fans with bad concentration spans, no musical staying power, or commitment issues then perhaps these schizoid A.D.D. arrangements will push the right buttons and recharge your batteries. For some of you, records like this only existed in your dreams.

Often locally discussed behind the limelight of her wider continental contemporaries such as Asha Bhosle and Noor Jehan it is almost impossible to find adequate comparison to K.S. Chithra. Try taking the yearning vocal energy of Turkey’s Selda and the falsetto range of Morricone’s best Italian choirs, add the playful existentialism of Poland’s Urszala Dudziak and the cinematic pedigree of Asha then sprinkle some saccharine Jane Birkinisms on top and set your turntable pitch at plus 8 while you dream of Dots And Loops era Stereolab or a Malayalam Mantronix – alternatively just buy this first-time compendium and press play.

Born in 1963, in the Keralese capital of Thiruvananthapuram, K.S. Chithra found work as a teenage Malayalam playback singer after winning National Talent Search Scholarship. Chithra’s first Ilaiyaraaja penned soundtrack Neethaanaa Andha Kuyil in 1986 heard the singer combine her unique vocal talents with electronic keyboards and effects leading to a long running creative relationship and a wide discography of increasingly erratic and experimental pop. Exercising onomatopoeic sound effects, melodious falsettos and all manner of theatrical vocal gobbledegook to compliment the cut and paste electronic pop of her composer, Chithra took some of Ilaiyaraaja’s finest moments and magnified, colourised, feminised and projected them far and wide across South indian celluloid adding a floral vibrancy to one of the branchiest trees in Eastern popular music.

The true beauty of these songs bloom from the cross pollination of early recording techniques, classical musicianship and traditional songwriting with futuristic technology and home studio lo-fidelity without feeling the need to polish over the cracks. Renowned for substituting conventional instruments with low budget techniques like sampling, looping, multi-tracking, drum machines and synthesizers or electric keyboards, Ilaiyaraaja, alongside Chithra, found that the film industry provided a dramatic basis to experiment with the freakier emotive side of popular song – a gamble that won them the hearts of the nation and reshaped Kollywood pop ushering sub-continental sonics into the digital era before eventually leading to Chithra’s extensive portfolio of 15000 film songs.

This compilation focuses on a small and select handful of Chithra and Ilaiyaraaja’s developing collaborations from the formative years of their relationship between – 1986 and 1991- a vibrant time where analog recording techniques and digital technology first overlapped and Chithra, as a developing vocalist, adapted to the the sounds and arrangements of a classic maverick composer pushing the boundaries. Many of these tracks are duets with her male counterpart S.P. Balasubramaniyam (who holds the world record of 40000 for most songs commercially sung) as well as Malaysia Vasudevan and Gangai Amaran which originally appeared exclusively on very limited pressings for Ilaiyaraaja’s own self-funded Echo label.

Following our previous compilation of the earlier Ilaiyaraaja film music with our Solla Solla compendiums Finders Keepers Records continue this relationship with the original rights holders, to bring these rare Tamil recordings the a wider global audience – never previously released on CD and considerably rare on their original vinyl pressings.