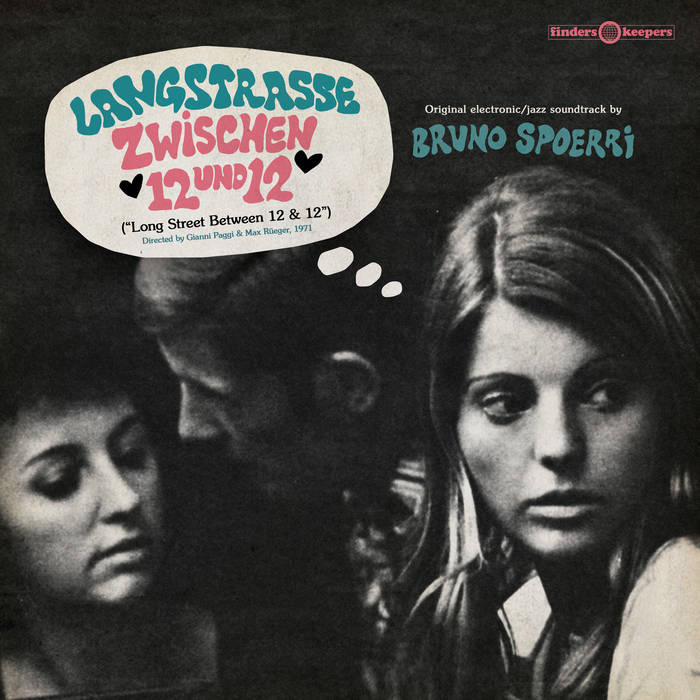 From his seemingly bottomless well of unreleased conceptual pop, jazz and pioneering electronic experiments, Swiss composer Bruno Spoerri, in conjunction with long term collaborators Finders Keepers, finally unleashes the master tapes to an obscure 1972 feature length documentary called Langstrasse Zwischen 12 und 12 (Long Street Between Midday And Midnight). Directed by Gianni Paggi (who had also worked on Swiss pop music weekly Hits A Gogo) and radio host and author Max Rüeger this seldom seen film studied the stark counter balance between the lifestyles of the inhabitants of Zurich’s famous Langstrasse – a varied and vibrant stretch of road in centre of the city which played host to a unique mix of contrasting cultural and social groups, working class families and energetic creatives. Langstrasse Zwischen 12 und 12 explored real-life stories of family run businesses, schools, nine to five commuters and the contrasting nightlife scene including the city’s liberal after hours red light district. To accentuate the ironic and slightly schizophrenic nature of the production Paggi and Rüeger called upon Spoerri as one of the country’s most versatile instrumental composers to share a first-hand impression of the area as a local himself. Exploring a wide range of musical disciplines from early modified synthesisers to rock rhythms via found sounds, jazz, folk and traditional Greek music, Spoerri successfully infused vibrant bursts of sonic colour into the monochrome imagery of the programme, creating a floating narrative undercurrent quite unlike anything heard on regular Swiss TV during the era.

In scoring such a project to a precise deadline Spoerri would require a trusted group of regular musicians, many of whom would appear on collectable records by Swiss groups such as The Metronome Quintet, The Rainbow Orchestra and Emphasis. As a leader of The Metronome Quintet himself Bruno was comfortable working alongside reliable members Fernando Vicencio (sax and flute), Ueli Staub (vibes, keys and percussion) and drummer Rolf Bänninger – who’s prominent playing is best exemplified on the previous Finders Keepers/Spoerri LP Hommage Au Fromage. Other players on this session include Latin multi-instrumentalist Antonio Conde who had simultaneously bonded with Vincencio in the jazz rock super group The Rainbow Orchestra under famous guitarist/soundtrack composer Pierre Cavali (see record FKR008). Another Cavali/Vincencio collaborator to appear on this album is pianist Renato Anselmi who would later join both musicians in the band Emphasis – vital to this session Renato Anselmi would provide extra keyboards to Bruno’s experimental and textural synthesiser tones. Later in the 1970s Spoerri would also enlist Anselmi to play on the soundtrack to art house film Lilith (recently sampled by US rapper Jay Z. For hardcore collectors of European jazz the appearance of trumpeter Franco Ambrosetti might warrant some deserved attention. A firm fixture on the Swiss jazz scene alongside Spoerri and regularly playing with George Gruntz, Ambrosetti’s earlier work on records alongside players like American sax man Shahib Shihab or French saxophonist Barney Wilen remain some of the most expensive original items on the collectors market. The final icing on the cake for this session would be the inclusion of Switzerland’s leading harmonica player Heinz Pfenninger, a welcome addition to the group having played with Ueli Staub in the award-winning Roby Weber Quartet (Pfenninger can also be heard playing bass alongside Rolf Bänninger on Spoerri’s aforementioned Hommage Au Fromage LP).

Like most of Bruno’s releases on Finders Keepers Langstrasse Zwischen 12 und 12 sees the artist explore unique new territories, combining the skill of incredibly talented musicians and combining his own discoveries in the realms of electronic music and his own brand of post- concrète found sound application which would appear on his rare postcard records made for industrial companies utilising wristwatches, pneumatic drills and forklift trucks as essential parts of his orchestral palette. This early 70’s glimpse into Spoerri’s narrative composition for the small screen captures an important European artist-cum-scientist treading a seldom trodden path between experimental pop, jazz and music technology in its infancy.