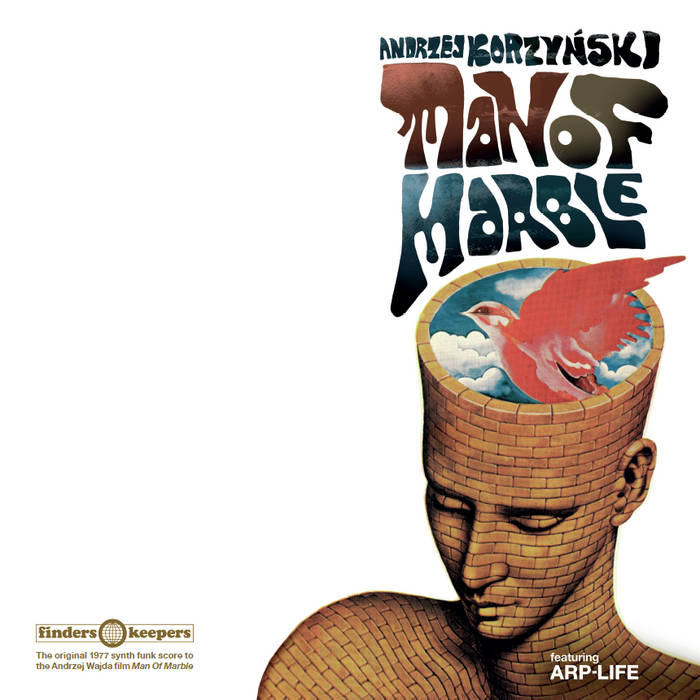 Begging direct comparison to Russia’s Zodiac and sharing an uncanny resemblance to other 1970s European post rock cinematic disco bands like France’s Arpadys (formerly Jean-Claude Vannier’s Insolitudes) or the later projects of Italy’s Goblin (such as Discocross) this soundtrack witnesses Korzyński and Arp-Life at their halcyon; making fantastical and experimental musical approximations of the burgeoning synth funk disco boom which had erupted on the other side of the Iron Curtain.

Man Of Marble unearths Korzyński’s first steps into electronic dance music, and with the addition of bonus tracks from the 1981 sequel Man Of Iron, provides the perfect companion piece to his recently liberated score to Possession (directed by Andrzej Żuławski) which blends the same ingredients through another darker corridor of this versatile composer’s creative mind.

Having given Korzyński his first big domestic theatrical break with the soundtrack to the 1969 Fellini-esque film Everything For Sale (with the Łódź based beat group Trubadurzy), Man Of Marble marked the composer’s fourth collaboration with Andrzej Wajda, a partnership which spanned an eventful eight year pop cultural climate change and bridged the composer’s journey from orch/psych/rock to synthesised Polish cosmic disco - climaxing with the big screen debut of Poland’s first-ever dedicated synthesiser ensemble collectively known as Arp-Life, deriving their name from the first synth to arrive in Poland which hit Warsaw like a meteorite from another planet.

Initially assembled as a one-stop music machine to make library themes and inexpensive TV scores, the “group” (consisting of members from Korzyński’s previous beat combo, Ricercar 62, alongside the female choir known as Ali-Babki) would quickly gain critical acclaim in their own right - leading to a well respected, but slightly ahead of its time, moderately distributed LP (within communist territories) entitled Jumbo Jet.

Experimental and fantastique by definition and taking creative gambles as a necessity, these over-the-top synth-heavy techniques were deployed in filmic form for Man Of Marble to depict a stark, ultramodern contrast, accentuating a plot that switches between past and present tense, illustrating a 1970s researcher who retraces spurious political events that occurred forty years earlier. As with most communist stateowned record labels, Polskie Nagrania rarely encouraged the commercial promotion of film composers. Although Korzyński was an occasional exception to this rule (due to his previous career as a radio programmer, pop musician and writer), Man Of Marble would never be commercially released outside of the context of the film, rendering this Finders Keepers release as another vinyl milestone and providing new context for these latter-day misunderstood instrumentals which have arguably never sounded as relevant as they do in today’s climate.

Alongside Andrzej Żuławski (Possession and Third Part Of The Night), Wajda was one of Korzyński’s two consistent returning collaborators when it came to composing for film, providing a yin and yang for Korzyński’s musical multiple personalities. Where Żuławski (as a former schoolmate) would link Korzyński to controversy with his consistently banned domestic films, it was Wajda who would be the first to put Korzyński’s name on the colourful film posters that adorned Polish streets.