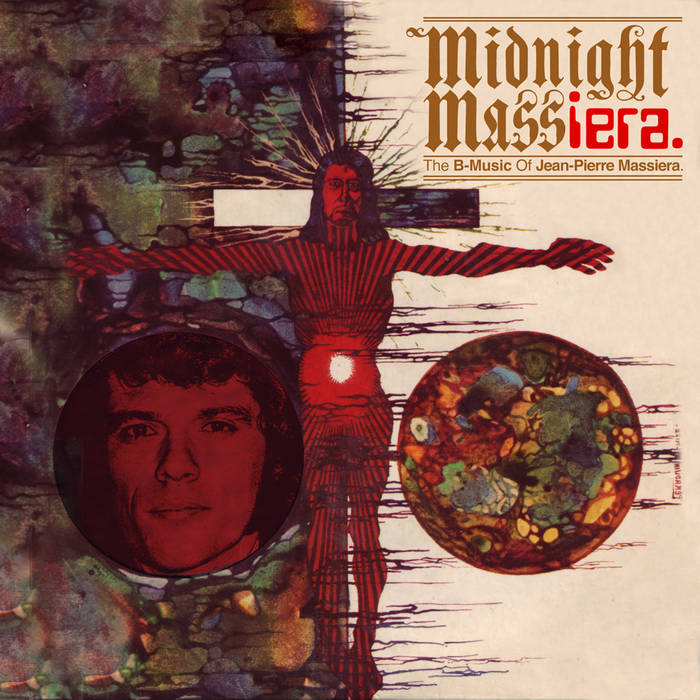 Eighteen sacred psychedelic suppositories from the laboratory of Mad Scientist and scalpel happy pop mutilator Jean-Pierre Massiera. Including the rarest and most sought after fuzz funk, spooked surf and interplanetary prog from “The French Joe Meek” and all his schizoid split-personalities and freakish friends - The Maledictus Sound, Chico Magnetic Band, Visitors, Human Egg, The Pirhana Sound and Jesus himself.

Let us introduce you to some old friends of ours... Charlie Mike Sierra, Jean-Pierre Areisam, JPM and Co. Erik, The Horrific Child, Jesus, Les Maledictus Sound, Human Egg... This might sound like we’re flicking through the imaginary LP racks in the record shop from A Clockwork Orange or perhaps congratulating the runners up in a Halloweeen fancy dress competition but for the previously uninitiated you have just been ordained into the congregation of the many split personalities of one Mr. Jean-Pierre Bernard Massiera. Bow down to the nine headed monster as he mutates and shape-shifts back through time to his humble beginnings in a Buenos Aireian province ravaging and pillaging the music of the European people for his own twisted benediction along the way.

This might, as intended, sound a little bit dramatic but if there is one single ingredient that gives the eccentric JPM his distinct flavour it’s a large dollop of drama. Add sprinklings of szichophrenia, shock, myrth and macabre and you are on the way to a B-movie broth with an acquired taste, that has, like all the best cheese, taken over thirty years to mature to perfection. Like all the best monsters, from the Centaur to the Minotaur to Dr. Jeckyl and Mr. Hyde his split personality is the key to his infamy and the secret of his blood sucking success!

This is why Jean-Pierre Massiera is (un)commonly known for two key periods in his career which, like a worm, can be split down the middle and thrive and flourish independently. To cut a long story short Massiera is, above all, a lover and purveyor of musique fantastique, and is willing and able to hijack whichever stylistic vehicle that passes him buy in order to do feed his lust. In the earlier part of his career he honed his sordid craft amongst psychedelic circles in Nice and Quebec. From late 1972 onwards he moved to Antibes and started a disco revolution and became an in demand cosmic record producer... For years prog rock obsessives and disco aficionados have wondered if there was two unrelated freak merchants called Jean-Pierre Massiera, but, in this rare instance, exploito-maniacs from both sides of the cosmic coin are united by the work of this singular, single handed monstrous music manufactory!

Another way to dissect the Histoire De JPM would read like a fantastic comic book. He started off as a musical scientist who was affected by chemical fallout in World War Two - he spoke to Jesus, went crazy and became a mad scientist. He then created a strain of mutant piranha fish which gave birth to a world of horrific monsters who assisted him in his murderous merriment. In the end he finds a giant egg and finally makes contact with aliens… That would be the end of chapter one and this is the era that we will focus on for this compendium (in chapter two JPM would be kidnapped by the Aliens and taken to planet disco to have sex with green goddesses and snort space dust on intergalactic nudist beaches where he probably still resides) In the worldly, derelict, laboratory of Dr. Jean-Pierre Massiera we are surrounded by decaying fish fins, test tubes, fuzz pedals, echoplex units and the lost souls and ambitions of aspiring young pop groups... I think your gonna like it here.