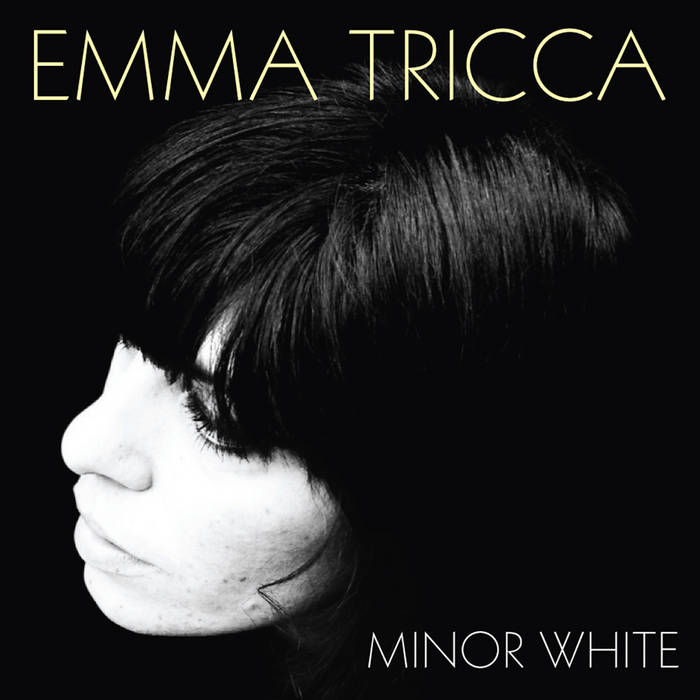 Anthony Childs A unique style with some guitar that for brief moments touches on Drake, Eitzel and even Lloyd Cole in his early band days. But definitely has her own sound. Love it when there's accompaniment but the extra instruments really let the vocal and guitar breathe and lifts the entire track by not trying to compete with her already beautiful song core. I wish I'd discovered this early enough to enjoy the vinyl, this is totally a vinyl album. But don't let that stop you from buying the CD. Favorite track: Lost In New York.

Italian-born, London-based singer-songwriter Emma Tricca has had her life shaped by two key encounters with folk legends. While still only an apprentice songwriter just out of school she met John Renbourn when he played a solo show in Rome. After the gig Emma got the opportunity to play John one of her own songs, his approval gave her the confidence to start writing and gigging properly and they remain firm friends. Very shortly after her first encounter with John, Emma met Odetta, the mysterious and legendary singer who had turned Bob Dylan onto acoustic music in the late '50s. Despite Odetta's reputation for reticence, they had a long, long conversation over dinner, and Odetta urged Emma to do what she'd been long considering doing - to move to England and study the craft there. Until then Emma's upbringing had been peripatetic, split between Italy and the UK, with excursions through Africa - Nigeria, Saudi Arabia, Eritrea and Libya - as well up and down the Italian peninsula. She comes from a family of scientists and artists. A grandfather worked for Siemens making discoveries in sound waves and communications while his brother, her great-uncle, painted. Her mother researched poetry, while her cousin wrote it. With her mother and uncle she listened to classical music as well as Elvis and his Italian copyists. A childhood fascination with Dylan's 'The Times They Are A-Changin'' album and the enigmatic image on its cover led Emma to investigate the luminaries of the '60s folk scene: from Dylan to Baez, then on to Joni Mitchell, Carolyn Hester, Phil Ochs and Dave Van Ronk. When she was 14 her cousin got a guitar as a birthday present. He never played it, but wouldn't lend it to her either. So when she was 16 her scientist grandfather gave her the money and she bought that guitar from the cousin. It was a long journey from there until she first moved to England, but one spent listening, learning and writing. Based initially in Marlow, Emma learnt traditional songs and played in the clubs of Oxford, where she was noticed by eminences like Roy Harper and Phil Guy. move to London saw Emma hone her music at open mic nights all over the city, before gathering a band of like-minded musicians around her to release her first album - 2001's Gypsies And Red Chairs. It was a record of certainty and character, marked out by playing that was both assured and precise and singing that garnered comparisons with Judy Collins and June Tabor. Given both her itchy feet and love of the Greenwich Village folk musicians, it was perhaps inevitable that Emma would make the pilgrimage to New York, living there and in Texas for a while before returning to the folk clubs of London. In the summer of 2006 she was spotted playing at the Green Man festival in Wales by DJ and Finders Keepers/Twisted Nerve record boss Andy Votel and his partner, the singer-songwriter Jane Weaver. The meeting led Emma to be invited by Jane and Andy to play a night they were involved in as part of Jarvis Cocker 2007 Meltdown festival. Both her performance and her contribution to the attendant compilation album were critically acclaimed by the international press, leading to a full UK and European tour and dates supporting John Renbourn. Recorded in Good Times Studios and released in Spring 2009 by Finders Keepers/Bird, Minor White is the perfect summation of Emma's story so far - a natural product of all those miles travelled and all those songs played. Indeed, the elegance and unvarnished charm of the songs here is only matched by the sense of well-travelled melancholy that reflects Emma's international upbringing. It's a truly timeless work, which means that these songs will endure as much as those that inspired Emma to pick up a guitar and start to sing in the first place.