Music From Mathematics Volume One 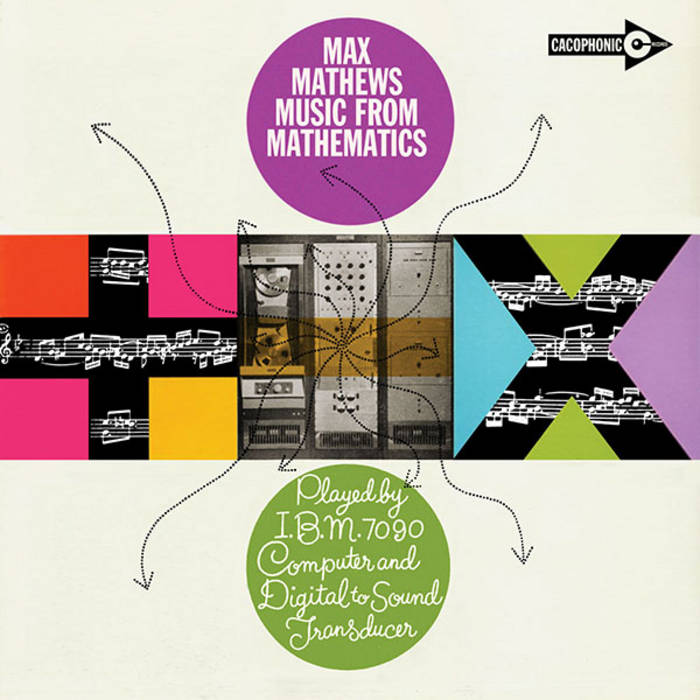 Originally released in 1960 and 1962 on two unique formats with over-lapping tracklists, the seminal Music From Mathematics Showcase Project marked the phonographic introduction of computer generated music for the first time in the public arena. Almost exclusively created at Bell Laboratories using an electronic to sound transducer and a state of the art IBM 7090 (complete with a gargantuan 32KB of disposable memory!) Music From Mathematics featured multiple random-not-random sound assaults preconceived by a host of technicians-cum-musicians eager to challenge the way humans would make and create music at the turn of the New Millennium. Amongst a list of pioneering composers, the two original limited releases pressed by Decca and Bell Telephone Laboratories feature a majority cross section of recordings by two leading composers – project instigator Max Mathews and Bell Laboratories’ stalwart vacuum tube scientist John Robinson Pierce.

As a tutor to many experimental electronic composers who studied at Stanford Artificial Intelligence Laboratory (including Suzanne Ciani) and as an inspiration to the subsequent generations that followed the original electronic music boom, Professor Max Mathews’ legacy began with the birth of computer programming technology for music composition (his method known as MUSIC-N) in the 1950s which was showcased amongst other performers on these seminal recordings from 1960. For a man with as many protégés as personal electronic music achievements Mathews maintained a strict behind the scenes role despite perhaps his most notable public endorsement when referenced in Stanley Kubrick’s 2001 which paid homage to his haunting robotic version of Daisy Bell/Bicycle Made For Two (which appears here) sung by the Hal anti-character. As the man who taught the robot to sing it is fair to state that a vast portion of the electro or techno made by today’s musicians can be technically (undeniably) attributed to Mathews’ early achievements exemplified here, and not least substantiated by the fact that the leading visual programming language found in music production software known as Max MSP remains a testimony to his legacy. It’s time for microchip pop fans to visit your grandparents.