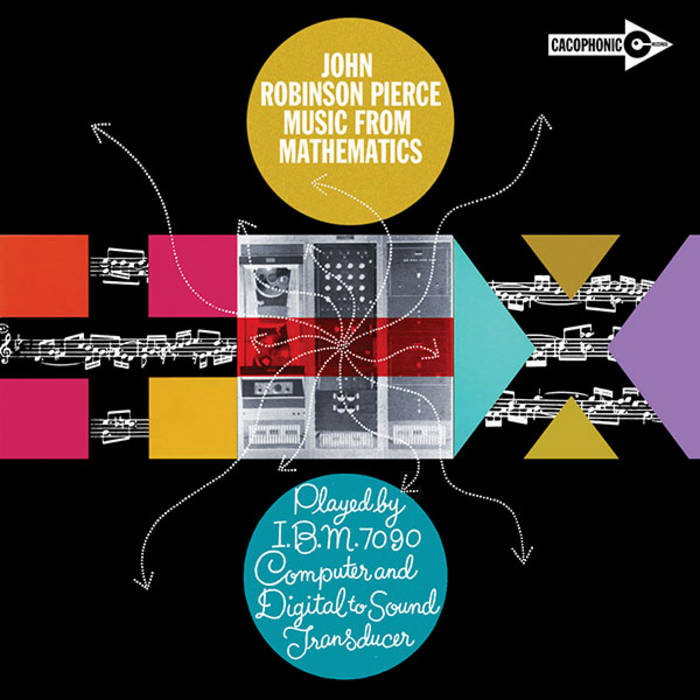 Originally released in 1960 and 1962 on two unique formats with over-lapping tracklists, the seminal Music From Mathematics Showcase Project marked the phonographic introduction of computer generated music for the first time in the public arena. Almost exclusively created at Bell Laboratories using an electronic to sound transducer and a state of the art IBM 7090 (complete with a gargantuan 32KB of disposable memory!) Music From Mathematics featured multiple random-not-random sound assaults preconceived by a host of technicians-cum-musicians eager to challenge the way humans would make and create music at the turn of the New Millennium. Amongst a list of pioneering composers, the two original limited releases pressed by Decca and Bell Telephone Laboratories feature a majority cross section of recordings by two leading composers – project instigator Max Mathews and Bell Laboratories’ stalwart vacuum tube scientist John Robinson Pierce.

Having played a leading role in the development in Telstar 1 (the first commercial communication satellite) as a radio communications polymath, Dr. John Robinson Pierce and his earliest lesser-known abstract musical achievements might well have been the only bona fide first-hand examples of space rock – a concept that even Joe Meek couldn’t come close to. Working extensively as a well respected figure in the fields of psychoacoustics, radio communication, computer music and science fiction writing, Pierce’s post-concrète abstract submissions to the Music From Mathematics Showcase Project mark the very earliest murmurs of the experimental computer music which would eventually lead to his position at Stanford University in the late 70s where he developed non-octave scales such as his own pioneering Bohlen–Pierce Scale. Coining the self-deprecating phrase “funding artificial intelligence is real stupidity” is self-admission that alongside Max Mathews (with their research into computer generated music) he created the happy monsters that became electro or techno and the dawn of the musical replicants that followed. Itis time for microchip pop fans to visit your grandparents.