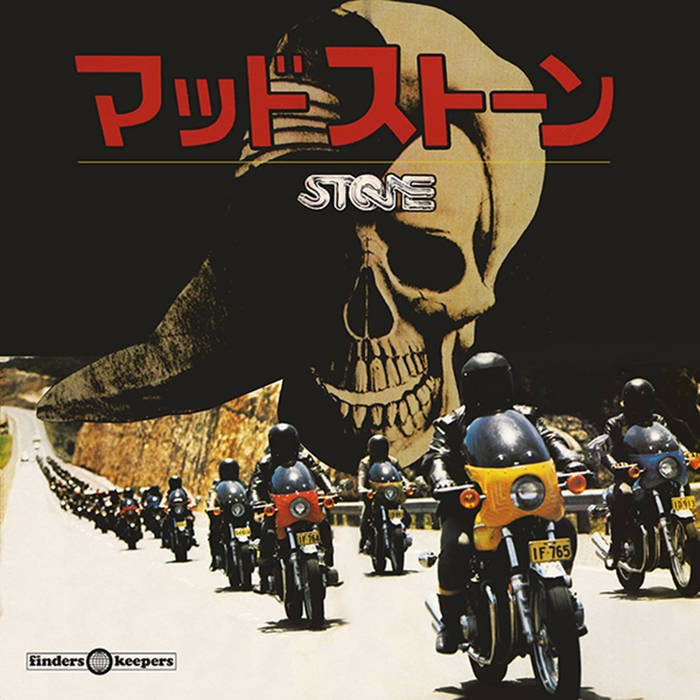 Meet Stone. The trailer says it all. A deep Australian drawl narrates the scene over a psychedelic swamp-funk rhythm section doused in electronic percussion and treated keyboards. “Stone Is A Trip… The grave diggers are on the move – a new breed of motorbike gang.” The screen fills with images of slo-mo bike accidents, hallucinogenic trips and a death defying cliff stunt which could easily mistaken for a doppelgänger scene in Psychomania. “Vietnam veterans with their own style of life, their own rules, their own religion.” The scene swathes to a satanic ritualistic burial at the hands of a denim-clad crew of outlaw bikers with strangely familiar faces.

To many global record collectors, DJs, music producers and general retrophiles living outside of Australia “Stone” was primarily known for its electronic sound effects, psychedelic guitars, cosmic sound scapes and funky basslines… In the 80s and 90s, before the global DVD boom, Stone to many people was first and foremost a Soundtrack… The kind of soundtrack that makes you wish you could see the film but it’ll probably never happen. The LP artwork alone was beyond enigmatic with its contradicting embroider logo (designed by sandy) alongside its striking futuristic airbrushed chrome insignia (designed by comic artist Peter Ledger and realised by airbrush whizz Errol Black). The huge parade of brand new Kawasaki bikes inside the gatefold looked like something from the future compared to the classic full-dresser Harleys from the American Hells Angels movies. And when the needle drops into the groove and the freakish blend of didgeridoo and Moog (played by Johnny ‘Didge’ Matthews and synth expert Andy Cohan) blended with unidentified clicks belches and pops fly out the speakers it is literally impossible to put a date, never mind a story line, to this acid fuelled soundscape. The use of confusing and contradicting musical influences alongside bizarre noises is actually the secret sauce in this concoction and when the swampy psychedelic funk-rock rhythm section kicks-in you are left with a 45 minute programme of skewed. Forward-thinking avant-pop that would stylistically fill a very lonely section in the record shop racks. There are not many records quite like Stone.