Strain Crack & Break: Music From The Nurse With Wound List Volume One (France) 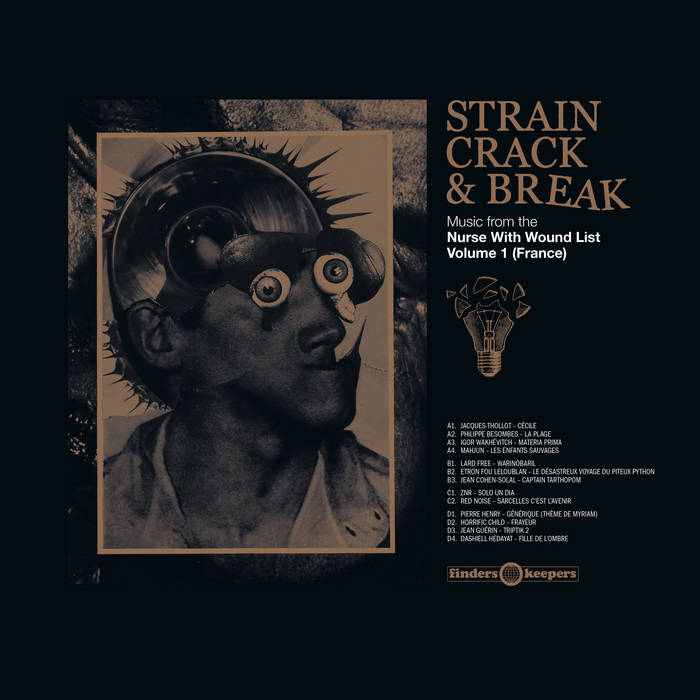 derek adams incredible record, thank you so much finders keepers and steve stapleton. these ears are never going to get to sleep now! Favorite track: Sarcelles C'est L'avenir.

Kiltyman The past is another country, they did things so differently there

fishanthrope Wow, I've been waiting for someone to take this on for 30+ years! Who better than Finders Keepers? Hope they do more volumes...

After years of mythology, misinterpretation and procrastination Nurse With Wound’s Steven Stapleton finally chooses Finders Keepers Records as the ideal collaborators to release “the right tracks” from his uber-legendary psych/prog/punk peculiarity shopping list known as The Nurse With Wound List, commencing with a French specific Volume One of this authentically titled Strain Crack Break series. Featuring some Finders Keepers’ regulars amongst galactic Gallic rarities (previously presumed to be imaginary red herrings) this deluxe double vinyl dossier demystifies some of the essential French free jazz and Parisian prog inclusions from the alphabetical “dedication” inventory as printed the anti-bands 1979 industrial milestone debut.

When Steven Stapleton, Heman Pathak and John Fothergill’s anti-band Nurse With Wound decided to include an alphabetical dedication to all their favourite bands on the back of their inaugural LP the notion of creating a future record dealers’ trophy list couldn’t have been further from their minds. By adding a list of untravelled European mythical musicians and noise makers to their own debut release of unchartered industrial art rock they were merely providing a suggestive support system of existing potential likeminded bands, establishing safety in numbers should anyone require sonic subtitles for Nurse With Wound’s own mutant musical language. Luckily for them, the record landed in record shops in the midst of 1979’s memorable summer of abject apathy and its sound became a hit amongst disillusioned agit-pop pickers and artsy post-punks, thus playing a key role in the bourgeoning “Industrial” genre that ensued. On the most part, however, the list , like most instruction manuals, remained unreadable, syntactic and suspiciously sarcastic… As potential “real musicians” Nurse WIth Wound became an Industrial music fan’s household name, but in contrast many of the names on The Nurse With Wound List were considered to be imaginary musicians, made-up bands or booby traps for hacks and smart-arses. It took a while for the rest of the record collecting community to catch on or finally catch up.

Since then, many of the rare, obscure and unpronounceable genre-free records on The Nurse With Wound List have slowly found their own feet and stumbled in to the homes of open-minded outernational vinyl junkies, D’s and sample hungry producers, self-propelled and judged on their own merit, mostly without consultation of the enigmatic NWW map. But, to the inspective competitive collector’s chagrin, one resounding fact recurs, NWW got there first! via vinyl vacations, on cheap flights and Interrail tickets, buying bargain bin LPs on a shoestring while oblivious to the pending pension worthy price tags after their 40 year vintage, Stapleton and Fothergill, even if you’ve never heard of them, were at the bottom of the pit before “digging” became paydirt. And NOW at huge international record fairs that occur in massive exhibition halls (or within the confines of your one-touch
palm pilot) amongst jive talk acronyms such as SS, PP, BIN, DNAP and BCWHES the coded letters NWW have begun to appear on stickers in the corner of original copies of the same premium progressive records accompanied by a customary 50% price hike to titillate/coerce the initiated as dealers extort the taught. Like “psych” “PINA” or “Krautrock” did before, “NWW” has become a buzzword and in the passed decades since its first publication The List has been mythologised, misunderstood and misconstrued. It’s also been overlooked, overestimated and under-appreciated in equal measures, but with a growing interest it has also come to represent a maligned genre in itself, something that all members of the original line-up
would have deemed sacrilegious. Bolstered by the subtitle “Categories strain, crack and sometimes break, under their burden,” all bands on the inventory (many chosen on the strength of just one track alone) were chosen for their genre-defying qualities… A check-list for the uncharted.

Forty years after Nurse With Wound’s first record, Finders Keepers Records, in close collaboration with Steve Stapleton remind fans of THIS kind of “lost” music, that there once existed a feint path which was worn away decades before major label pop property developers built over this psychedelic underground. As long-running fans and liberators of some of the same records, arriving at the same axis from different-but-the-same planets, Finders Keepers and Nurse WIth Wound finally sing from the same hymn sheet resulting in a collaborative attempt to officially, authentically and legally compile the best tracks from the list, succeeding where many overzealous nerds have deferred (or simply, got the wrong end of the stick). Naturally our lavish metallic gatefold double vinyl compendium would only scratch the surface of this DIY dossier of elongated punk-prog peculiarities hence out decision to release volume one in a series which, in accordance with Steve’s wishes, focuses exclusively on individual tracks of French origin, the country that unsurprisingly hosted the highest content of bands on the list. Comprising of musique concrète, free jazz, Rock In Opposition, Zeuhl School space rock, macabre ballet music, lo-fi sci-fi, and classic horror literature inspired prog, this first volume of the series entitled Strain Crack And Break throws us in at the deep end, where the Seine meets the in-sane, introducing the space cadets that found Mars in Marseilles.

Like the Swedish flat-pack record shelves that attempt to house the vast amounts of vintage vinyl that goes into a multi-volume compilation like this, it is time to prepare your own musical penchants and preconceived ideas about DIY music and hear them slowly strain, crack and break.