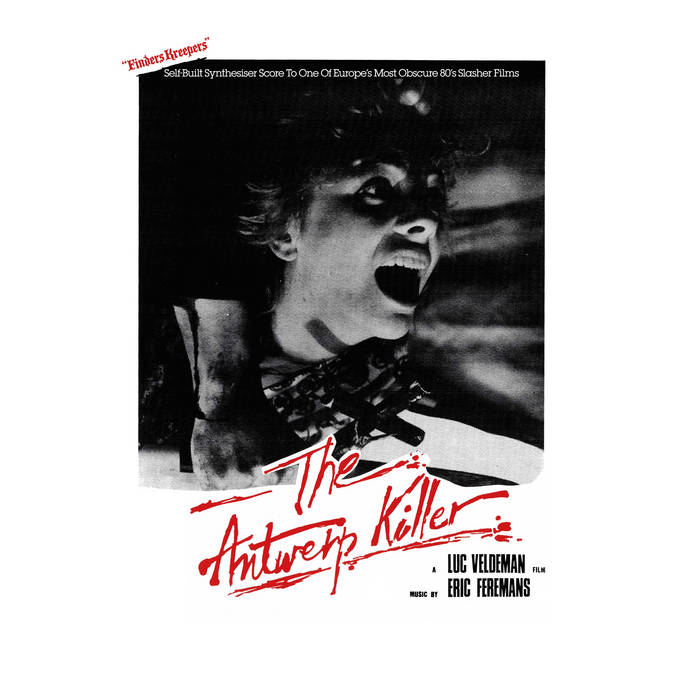 Spun Out Of Control

Teenage movie maverick meets synth scientist for bespoke Belgian B-movie. One of the rarest vinyl horror soundtracks of all time, 1983’s The Antwerp Killer is the rest of the remarkable homemade electronic experiments of the wunderkind synth designer and his unison with a smart-talking teenage movie maverick to create something almost unfathomable in the process. Combining self-propelled punk attitude and uninhibited confidence, the hyper pro-active work of these DIY prodigies pinpoints an important era where youthful ambition and creative technology meet.

By the age of sixteen Eric Feremans started building modulators and eventually his first proto synthesiser. Teaching musicians how this new technology worked became Eric’s mission. He found that in electronic music composition the understanding of the functioning of the machine is part of the musicianship. Without this they were just fooling around with new technology. By the early 70s Eric’s synths were becoming more and more complex and he even played a concert with Belgian electronica pioneer Karel Goeyvaerts. Eric decided to create his own school where he would teach his pupils to make build synthesisers and how to play them. The EEF (from Eric E. Feremans) was created. The build-your-own packages were created by volunteers and around 20 or 30 are said to have been made. After being a guest in a national television show the demand for courses exploded and Eric was lecturing nationally and internationally. Even attracting the king of the Amsterdam Mafia who would be driven down from Amsterdam with two body guards in his Rolls Royce every week.

One day Eric gets a visit from a Luc Veldeman a sixteen-year-old with a manner of speech way beyond his age and larger then life projects. Eric was in the process of making Antwerp’s first crime movie called The Antwerp Killer. He had seen Eric play live and he wanted some of his music to be used as the score and to press as a album to promote the film. Upon their first meeting Veldeman wanted a tape to convince his financial investors. Eric gave him one of the rare recordings he had made with the synthesizer. A session he had just recorded upon installing his new studio; a session, according to Eric, that was the result of the pure joy he experienced of having such a wonderful sounding machine in his studio and the bottle of vodka he downed during the session. That session was cut up by Veldeman and it was turned into the soundtrack of The Antwerp Killer.

Eric ended up playing a cop in the film and the film was the opening film of the Knokke Film Festival in 1983. It was honed away by the press and the audience. Bad acting, bad editing, bad script, cool soundtrack though. Veldeman was nowhere to be seen and everybody involved who had quit their jobs or studies to coöperate on this film or put in their money in it saw their hopes disappear. Veldeman had even rented all the film equipment with a false identity and then dumped it all in the canal after the shooting. When the cops eventually found out about his they weren’t even able to arrest him being a minor.

A magnum opus of a true criminal and the synthesiser teacher of the Amsterdam Mafia King, The Antwerp Killer remains a prime document of the broody Belgian 80s and a heck of a soundtrack.