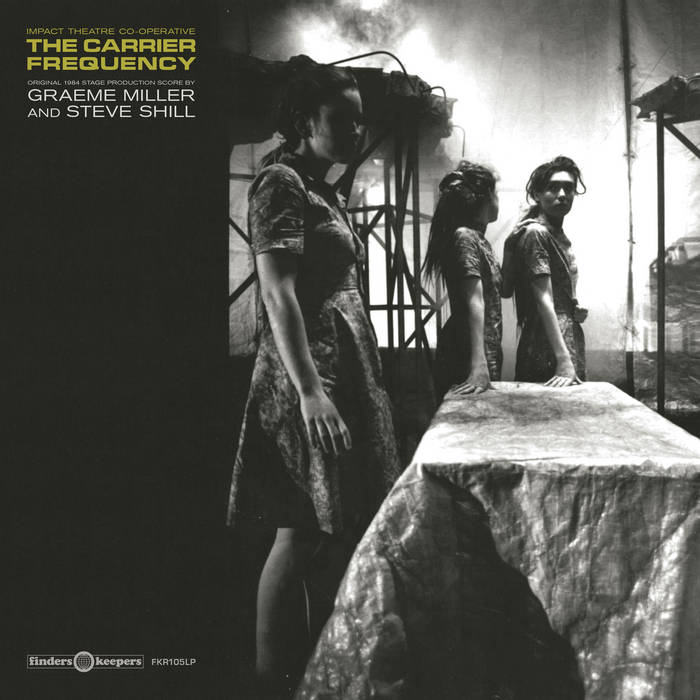 Frozen in time over four decades this 1984 “cyclic incantation” combines electroacoustics, grazed euphoria, industrial aesthetics, sampled salvage and recycled mechanic folk to score a widely revered dystopian physical theatre performance from the UK’s hugely influential Impact Theatre Co-Operative. From a seminal post-punk art-action faction (formed in a Leeds warehouse space alongside Gang Of Four and The Mekons), this apocalyptic prophecy not only cracked avant-garde stage boundaries but provided a captive audience with stunning set design and an incredible broken-music soundtrack before its swan song amidst Poland’s 1986 power plant panic. From the sonic workbench of the very same bedsit-Situationists that created the haunting 1983 music to The Moomins TV animation comes the eventual isolated music release to this pioneering theatrical spectacle of truly mythical status.

The Carrier Frequency (1984) was a legendary stage work that emerged from the collaboration between the influential performance company Impact Theatre Co-Operative and cult novelist Russel Hoban. The incantation of Hoban’s text voiced in the broken verbiage of a post-apocalyptic broken language and the entranced physicality of Impact’s ritualistic performance in a pool of cold dark water printed deeply on those who witnessed it. It reached an impassioned crescendo on the rising score by Graeme Miller and Steve Shill who also performed in the work. The music exploited samples from Hoban’s own recordings of the shortwave radio broadcasts which he tuned in as he wrote, helping him order the green phosphorescent letters on the screen of his Apple computer. Shill and Miller mirrored Hoban’s channelling in their approach to making the score, following the notion that this was the broadcast of some Central Eurasian radio station doomed forever to circulate fragments of static interlaced with desultory public information broadcasts and “The Record”, its only surviving fragment of a lost culture. The score was forged on an 8-track tape recorder sandwiching harmonium and accordion with the output of a digital delay machine that could trap and fragments of audio to be triggered and manually pitched. It is a knowingly crude montage where samples denote fragmentation itself and their reassembly, like Frankenstein’s monster, shows the stitches that join the stolen body parts.