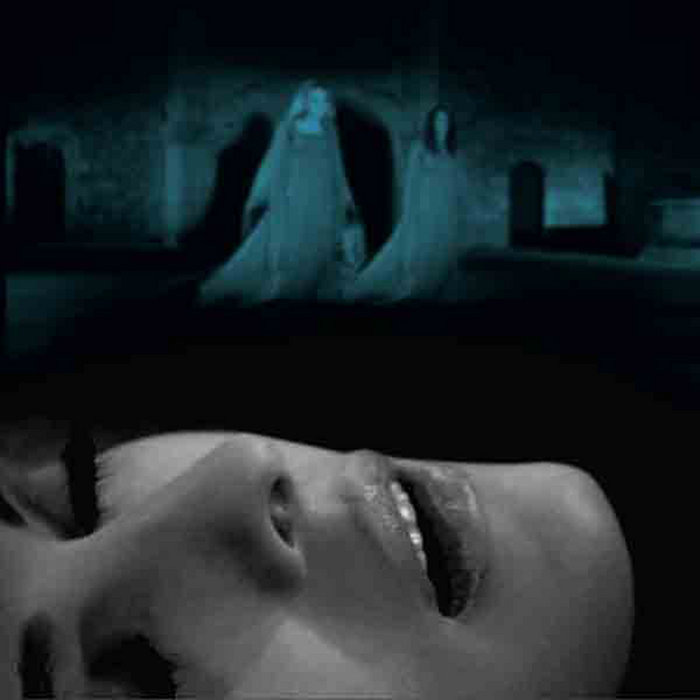 Finders Kreepers continue their 7″ series of vintage macabre film music with a volume dedicated to European vampire cinema with the two most notorious exponents of the horrotica genre at the helm. Although often put on the same platform the films of these two self-sufficient European filmmakers are in fact very different from each others celebrated efforts, having collaborated on just one occasion with Rollin directing a short dream sequence for Franco’s film Virgin Amongst The Living Dead (complete with its pulsating Bruno Nicolai score).

On the a-side of this installment we witness Franco and Nicolai back together for one of a handful of titles including the earliest appearances of the legendary Soledad Miranda. Completed in 1970, Il Conte Dracula brings together an unlikely cast of Miranda, Christopher Lee (in his archetypal role) and Klaus Kinski as a fly eating psychiatric patient made nine years before he would assume the role of the bloodsucking monarch for Herzog’s Nosferatu. Musically this feature bequeaths a lesser spotted score from Morricone’s arranger and sidekick Bruno Nicolai made in the same period as his delectable scores for Sergio Martino’s All The Colours Of The Dark and Case Of The Scorpions Tale as well as Franco’s very own Marquis De Sade 70 adaptation (FKR069). This timeless biting harpsichord score blends relentless orchestral pulses revealing Nicolai at his thematic and communicative best – laying a stylistic blueprint for other European vampire scores like Francois De Roubaix Les lèvres rouges and James Kenhelm Clarke’s Vampyres.

On the b-side our alternative programme reveals another undetected Jean Rollin nugget from his very first cinematic feature, the two part bloodthirsty melodrama Viol De Vampire. Edited in accordance with soundman Jean Denis Bonan’s original cinematic usage this swooping dreamscape theme falls somewhere between Theremin and bowed saw and stands up as one of the most beguiling French library cuts by Parisian mastermind Roger Roger – appropriated alongside other pre-licensed mood music cues for the first chapter of the director’s theatrical debut. Fans of cult British TV series The Prisoner might also recognise the theme due to its synchronisation in two episodes of the original 1960s series. Suitably complimenting the forthcoming Cacophonic release of Francois Tusques’ recently recovered studio scores made for the second chapter of the same feature (8CACKLP) this standalone b-side provides yet another piece to Rollins vibrant picture puzzle.