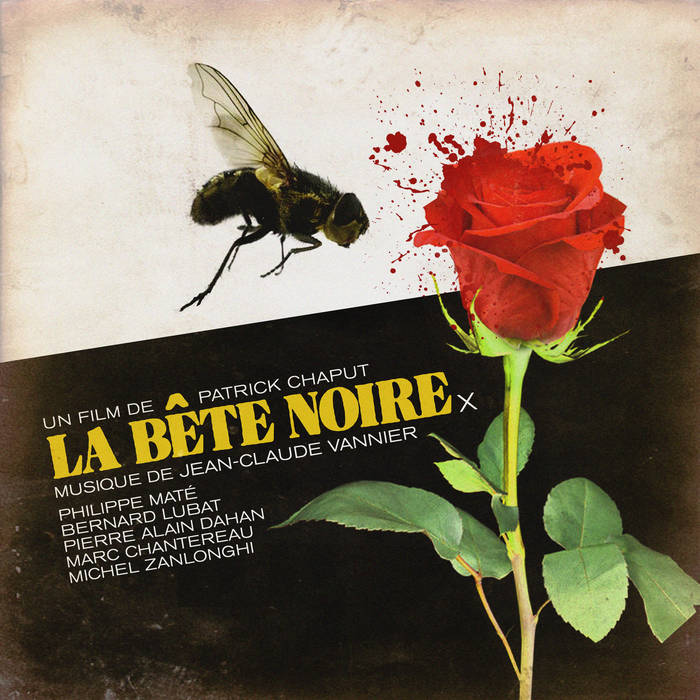 With a discography held in such high esteem amongst fans of conceptual French pop and soundtrack composition, the likelihood of finding an unturned stone amongst maestro Jean-Claude Vannier’s fertile psychedelic rockery falls somewhere between slim and skeletal. Even the most intrepid explorers of the most fearless and fastidious nature should naturally expect to encounter one or two shadowy characters when braving the oblique corners of the Vannier vault, but few lost souls cast a darker silhouette than the cinematic obscurity known only as La Bête Noire (The Black Beast).

Lost and presumed missing for decades the soundtrack tapes to this lesser-known 1983 French thriller (featuring a cast culled from films such as Alphaville, The Modern Couple and Sweet Movie) captures the revered composer and arranger of Serge Gainsbourg’s Histoire De Melody Nelson embarking on a darker exploration of free jazz, frenzied batucadas and cyclic carousel psychedelia. Counting key players of the French jazz scene within its ranks, The Insolitudes group comprises a crack team of Palm/Futura/Actuel/Saravah regulars such as saxophonist Philippe Maté (Acting Trio/Maté-Vallancien/Tacet) alongside drummer Bernard Labat (Mad Ducks) and legendary Arpadys/Voyage rhythm masters Marc Chantereau and Pierre-Alain Dahan (Brutus Drums) all of whom alongside Michel Zanlonghi (Ensemble De Percussion De Paris) make up this thunderous, tumultuous, four-headed rhythm machine bridging an authentic gap between The Jef Gilson Groups and France’s signature “cosmic” revolution. Naturally these previously unheard compositions are spearheaded by lead pianist and composer Vannier and for devotee’s of his 1972 concept album L’Enfant Assassin Des Mouche there is much to admire and cross-reference herein.

Having been the most loyal and long-running guardians of Jean-Claude’s monster archive over the past two decades Finders Keepers Records are proud to present this first catch of newfound vintage Vannier discoveries on this limited and unlikely free jazz 45 single (which should find a perfect home between coveted Euro jazz 7”s by Krzysztof Komeda, François Tusques and Brussels Art Quintet). Almost 15 years since Finders Keepers once liberated the Mouches it is now time to set free another Black Beast amongst discerning listeners.