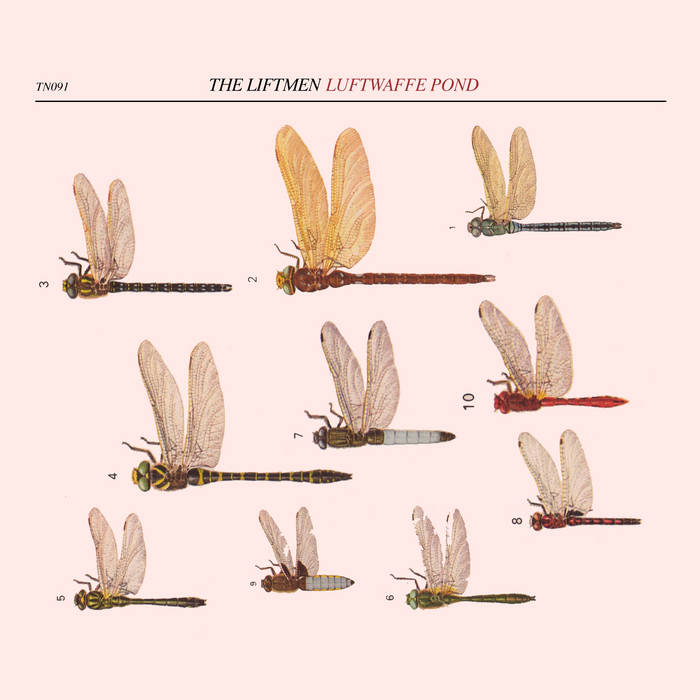 This unlikely group of pond-life obsessives formed in the confines
of a Bristolian industrial lift in 2002. The spawn of the Liftmen's
newt-ridden nucleus begs inadequate comparison with the likes of
Prag Vec, Tortoise, Thee Headcoatees and Young Marble Giants but
sounds a little bit like none of the above.

Consisting of the core members Rasha Shaheen, Neil Smith, Jamie
Whitby-Coles and Jesse D. Vernon a fully formed The Liftmen first knocked on Twisted Nerve’s door in 2005 armed with the concept of playing ‘songs of beauty (songs of terror)’ making their label debut on the pocket sized second-class-tome ‘Now Is The Winter Of Our Discount Tents’ compilation and have remained a firm fixture of the label's roster every since.

Luftwaffe Pond sees The Liftmen step out of the shaft and into the light, presenting elevennew shapes in amphibious rock music. Troubled Teens is a smart, scuttling intro about religious zealots trying to entice the vulnerable: there are echoes throughout of those fertile times when punk's brusque energy found its way to more subtle timbres via bands like Gang Of Four, The Bush Tetras and Jozef K, while at points an almost jazzy serenity descends recalling the Chicago school of the nineties... yet just as often this is gleefully ruptured by fuzzedout motorik detours and Deerhoofian thrusts into sonic overdrive. It is those moments that are gloriously expanded upon in their blistering live shows, where they are often joined by fellow Bristolian SJ Esau on sundry electronic devices.