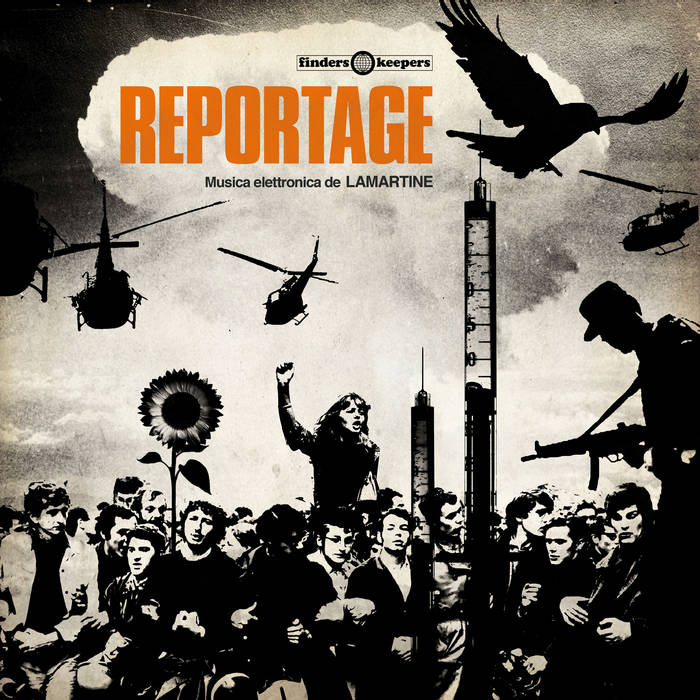 A genuine lost and unreleased full-length LP from one of the most mysterious figures of early Italian electronic sound and library music. A missing puzzle piece in the small discography of experimental tape and synthesiser music by the composer known only as Lamartine recorded (but never pressed) in 1974 by the archive that bought you the work of Daniela Casa and the wildest electronic experiments of Alessandroni, Giuliano Sorgini and Fabio Frizzi. Having sat in the can for over 40 years the similarities to the likes of Cluster, Tom Dissevelt and the Radiophonic workshop have yet to be recognised and celebrated.

The name Lamartine was a true mystery of library history.

In keeping with the habitual culture of library music the mononymous name Lamartine was very likely to be one of many creative nom de plumes designed to disguise the true identities of the artists – even the likes of Morricone and Bruno Nicolai had there own shrouded monikers (Leo Nichols and Leo Flag respectively). Having faded from the memories of the ex-employees of the defunct production music departments at CAM and RCA, the truth behind this uncelebrated electronic pioneer remained a mystery for over thirty years. As enthusiasts began to unravel the pseudonyms of other composers such as Tomassi and Alessandroni via cue sheets, invoices and interviews, suspicions around Lamartine being of non-Italian origin rose to the surface with rumours that he or she was most probably of German, Dutch or English decent due to his distinct similarities to artists like Kid Baltan from Holland, various electronic artists from the outskirts of the krautrock scene or British tape music composers such as Basil Kirchin or David Cain. All of whom had firm relationships with the international library music scene. Although most of the records made for the RCA 1000 series were also repackaged for syndication in France via the April Orchestra series, it was unusual that Cronache Dal Mondo didn’t benefit the same service, bringing into question the fact that Lamartine may have secretly been a big name artist legally contracted to exclusive territories or simply the author of music that was too challenging for wider consumption. Even searching for other unconfirmed aliases within the huge independent Italian library network, based of musical similarities or pure speculation, rendered little answers convincing unsatisfied fans that Lamartine had carefully covered his tracks or let the birds eat the breadcrumbs.

It wasn’t until thirty years later that the Italian independent production music label Flipper – the parent company responsible for the imprints Union, Octopus, Flirt and Deneb amongst others – decided to digitise its catalogue that a gleam of hope via a sealed, misfiled master tape shone through the trees. While putting a small archive of back-up recordings through the baking (emulsifying) process the archiving team at Flipper found the name “Lamartine” written on a single tape box with the name Reportage and corresponding legal papers pertaining to a little known Italian conductor and composer for stage and popular song named Mr. Radicchi. Fabio Di Barri at Flipper accounts that throughout the extensive paperwork at Flipper the music of Radicchi or Lamartine was never licensed out for synchronisation and doesn’t appear on any of the associated labels discographies. “The music was never even pressed on to vinyl and the master tape remained in our store room for all these years,” he told Finders Keepers in 2013. “It’s lucky that it was stored correctly because many lost magnetic tapes are prone to damage or separation.” After cross-referencing track times and titles Fabio could also reveal the full name of the artist to be that of Odoardo (aka Eduardo) Radicchi – a senior member of the Italian music scene from the same generation as Nino Rota, Giorgio Gaslini and Gian Piero Reverberi. The common occurrence of the elder statesmen of Italian popular music coming out of retirement to make experimental music for library labels and film companies would be the basis of a handful of unsolved mysteries in Italian cinema. Even middle aged composers like Remigio Ducros and Vince Tempera had enjoyed commercial success in the pop world before finding more freedom working within film music or television. Composers such as Coriolano Gori and Giampiero Boneschi were other examples of Italian composers who would revitalise their careers in later life under the production/film music system.

The late discovery of Reportage by Lamartine provides vintage electronic music enthusiasts with a wider vista of the development of the genre in Italy. The aforementioned names make up a small but closely associated and like-minded family of pioneers exploring a new direction with solo recordings in a very unique industrial capacity. Rendered in the hinterland between Italian cinema’s penchant for psychedelic rock and the onset of the synthesiser music and Italo disco movements later in the decade, these artists and their records represent the laboratory projects that researched the capacity of electronic music before it swept the nation’s media quite unlike anywhere else in the world. Lamartine – once an anonymous, dubious, genius in the library micro-genre – can now be named and recognised as a unique artist with a distinctive sound, adding new colours to the vibrant palette of Italian studio artists and painting a wider sonic picture of the evolution of Italian pop and film music and we believe to understand it. The Italian library liberation front keeps growing – the genre that keeps on giving. It’s time for artists like Lamartine to name and claim their places in electronic music history.